This year I visited Scotland for the first time in almost 10 years. Although it was just a short 24 hour trip it made me realise just how long it had been since my last visit. This prompted me to plan a longer trip up to the Scottish Borders for a weekend break with my family, over one of the May bank holiday weekends.

The drive to the Scotland’s borders is about 6-7 hours from my home in Sussex. As it was a bank-holiday weekend we decided to leave at 5am so that we could beat the traffic build-up, in particular, around Birmingham as it’s notorious for traffic congestion.

Despite fears that the traffic would be bad, we made very good time and reached Carlisle just after midday. As we had made such good progress we decided we would stop off at Hadrian’s Wall to get some fresh air, and stretch our legs. Hadrian’s Wall is a Roman wall built approximately 1900 years ago as a defensive fortification on the northern border of Roman Britain. 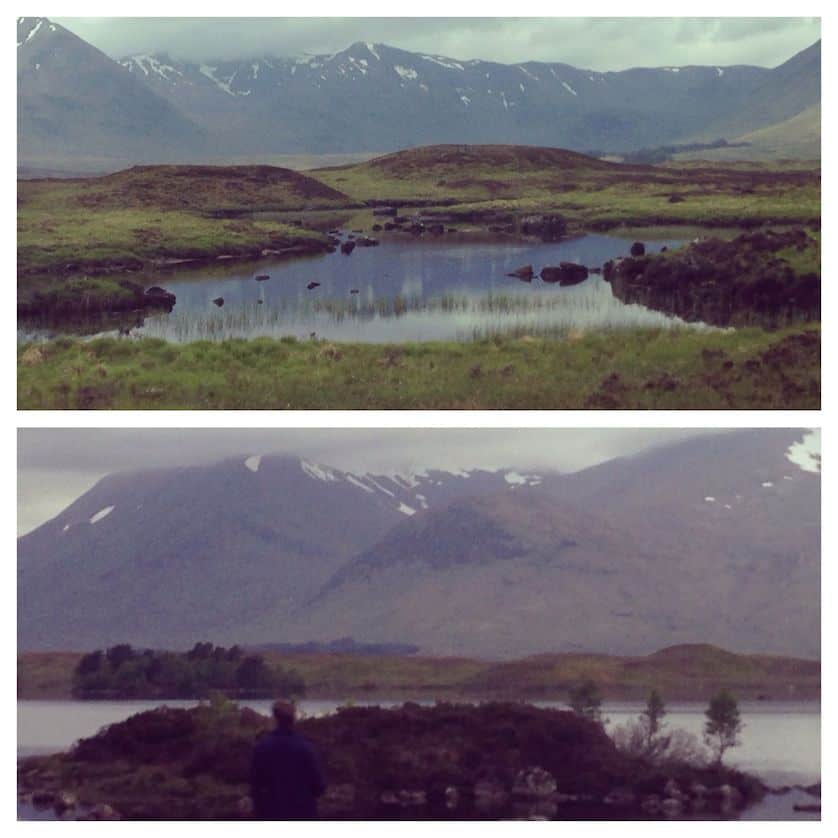 We didn’t stop for too long as it began to rain and we wanted to find somewhere for lunch, and so we took the scenic route which follows much of Hadrian’s Wall, before heading north again towards the Scottish Borders. About an hour after leaving the wall we found a roadside inn called the Redesdale Arms, and stopped here for a late lunch.

After a quick bite to eat we set off for the last stretch of our trip towards the hotel. We arrived at a quaint bed and breakfast called the Heatherlie House Hotel, in Selkirk about an hour later. My first impression of the hotel was that it had hardly changed since I last stayed here almost 20 years ago!

After a long day on the road we decided we didn’t want a late night, so we walked into town and came across a small pizzeria called La Contea. We ordered a few sharing platters and a main dish each. Given the relatively low prices we weren’t expecting much, but when we saw the size of the portions we were very surprised and we really did struggle to finish our meal. We finished the evening off with a drink in the bar next door, part of the County Hotel, but it was only one drink as we were all half asleep after our exhausting day travelling. 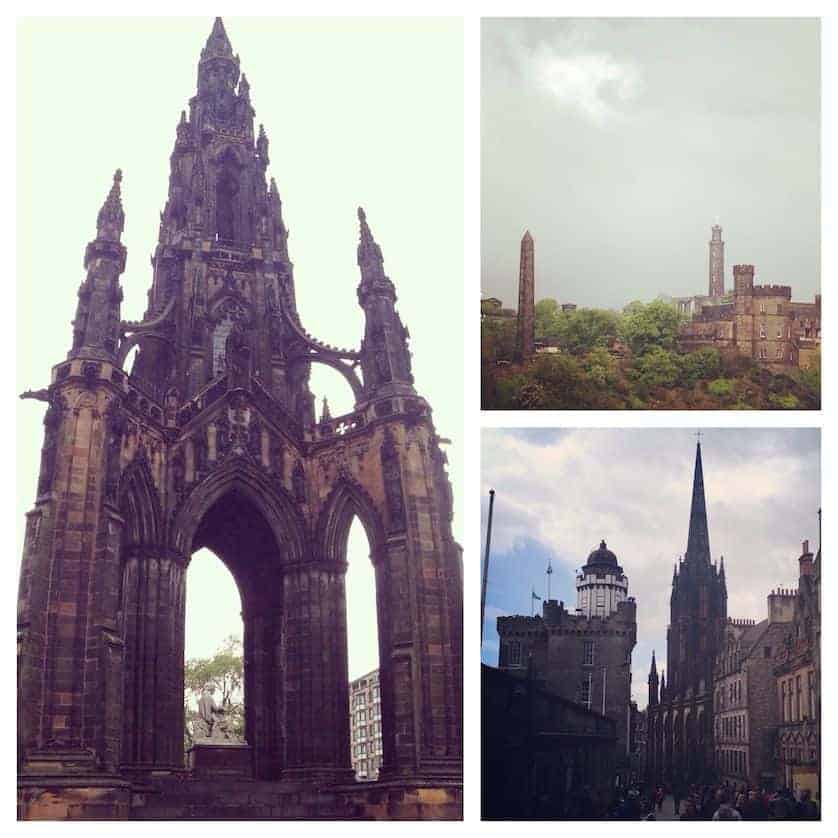 The next morning after a delicious fried breakfast, we headed out early as we wanted to visit Edinburgh for the day. We didn’t really have anything specific on our agenda, and although the weather was quite miserable we weren’t going to let that ruin our day. We drove up through the beautiful countryside of Scotland’s Borders, towards Edinburgh.

We arrived in Edinburgh midway through the Edinburgh Marathon, and so the roads were quite busy, but we battled through until we reached the city centre. We grabbed a parking space just off Princes Street and walked along Princes Street before heading up to the Castle, where they were building grandstands, in preparation for the Edinburgh Tattoo. We managed to get a few great photos of the Castle before the rain started. 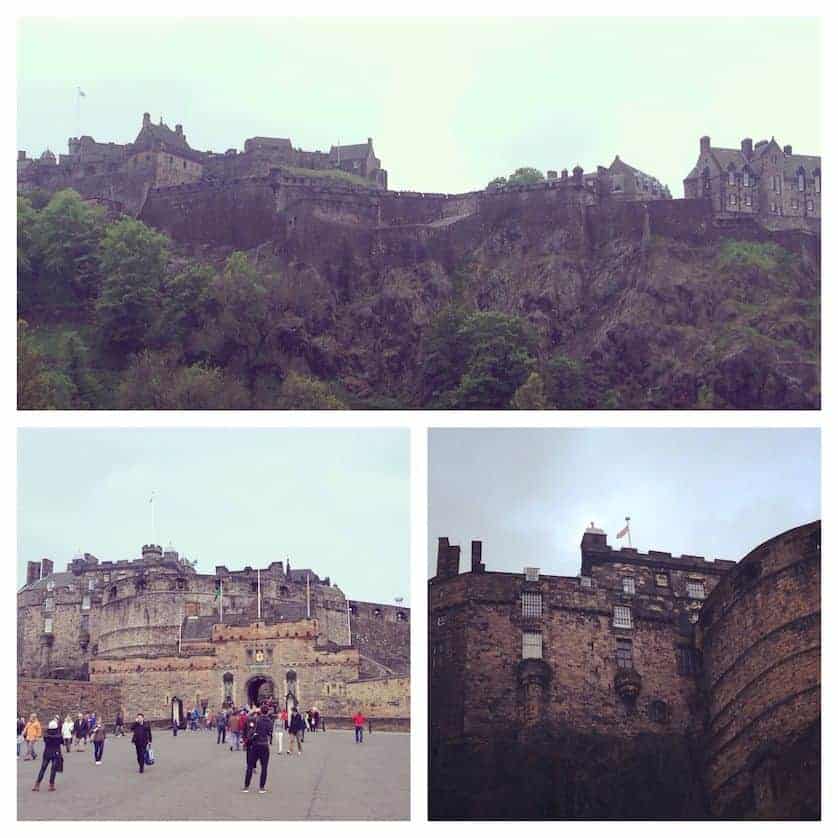 We walked down the Royal Mile from the castle, passing many Scottish themed gift shops. After a while we came across a Scottish Whiskey shop and couldn’t resist popping in to sample some, and of course, I left with a bottle. Even though I’m not the world’s biggest whiskey fan, it’s a must when you are in Scotland.

As we left the Whiskey shop the rain started to get heavy so we decided to go in the next restaurant we found for lunch. We stumbled upon a pub-restaurant called the Albanach, which was a welcoming retreat from the rain. With such dismal weather, and the fact that we were in Scotland, I chose a comforting bowl of Scottish beef stew with dumplings, washed down with a pint of local ale. 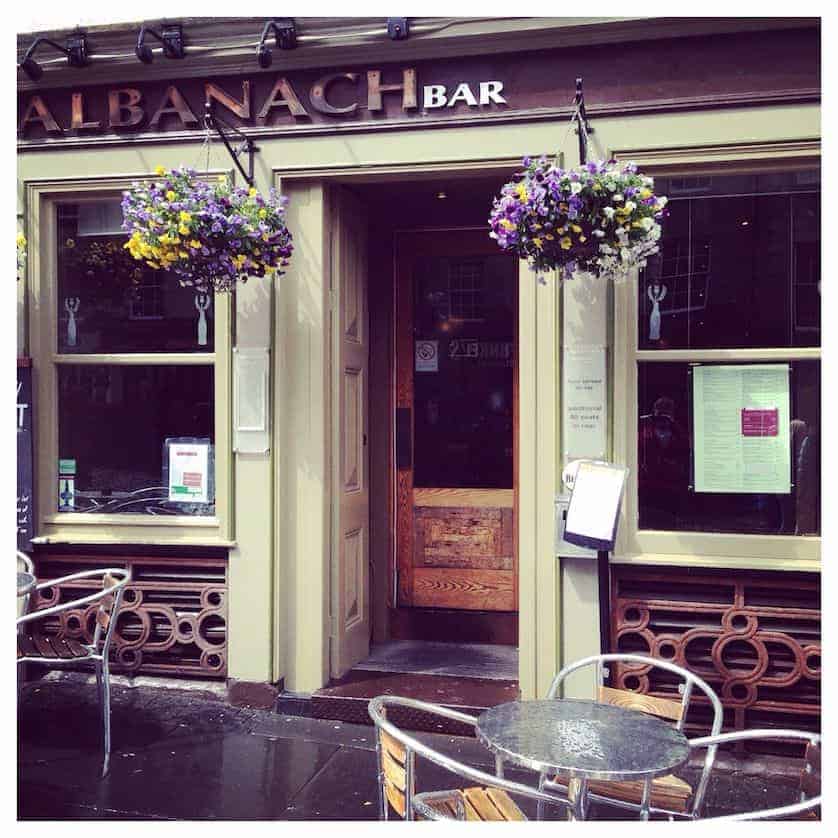 After lunch, we headed back to the car, but not before making that essential stop at the Hard Rock Cafe for a Long Island Ice Tea and the obligatory t-shirt purchase.

With the sun finally shining through we took the scenic route back to the hotel through the borders. We had already decided to try the local curry house for dinner, which was a few doors down from the Pizzeria. The nice thing with a curry house is that you nearly always get what you expect, and this place didn’t fail us! Afterwards we headed back to the hotel for some drinks in the bar, before turning in for the night.

We had very ambitious plans for our last day; as well as the drive back home to Sussex we decided to visit Loch Lomond and Glen Coe. A total drive of over 700 miles in one day. We set out early from the hotel and headed north-west towards Glasgow, then on to Loch Lomond – our first port of call. We stopped at Luss, a small picturesque village on the west bank of the loch, and a light rain shower didn’t stop us walking alongside the loch, enjoying the stunning scenery. 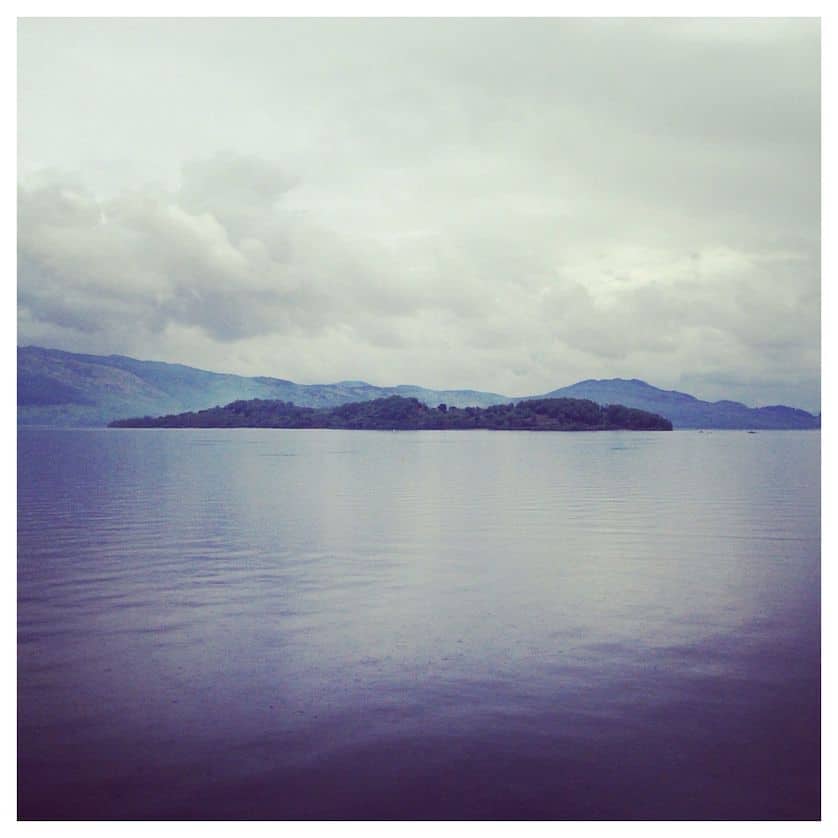 It was a brief stop as we were determined to drive through Glen Coe before heading home. To reach Glen Coe we had to drive the complete length of the loch and the same distance again. The rain cleared up and the scenery on the way there was breathtaking, so there were no complaints. 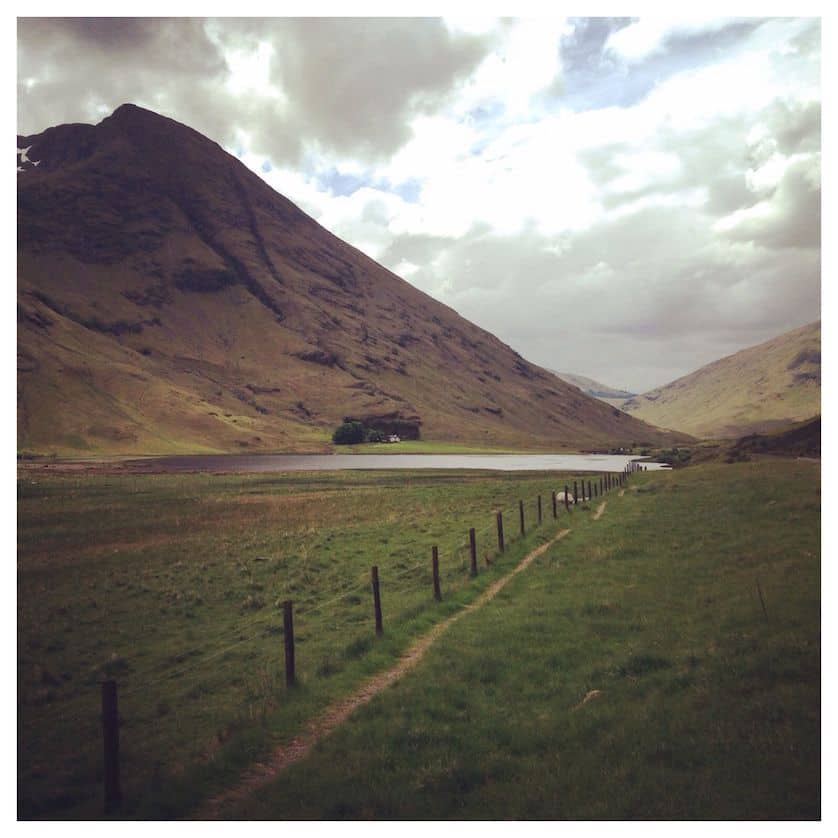 Eventually we reached the start of Glen Coe. We pulled over and got out the car to fully appreciate the stunning view, before enjoying the dramatic landscapes as we drove through the glen to the other side. Once we reached the other side it was already early afternoon and time to stop for lunch at the Glen Coe Hotel before starting our journey home. From here we had a 550 mile drive to Sussex, we decided to take a different route home, cutting across country after leaving the glen, to join the motorway near Stirling. The whole journey passed much quicker than we expected and we arrived back home around midnight. 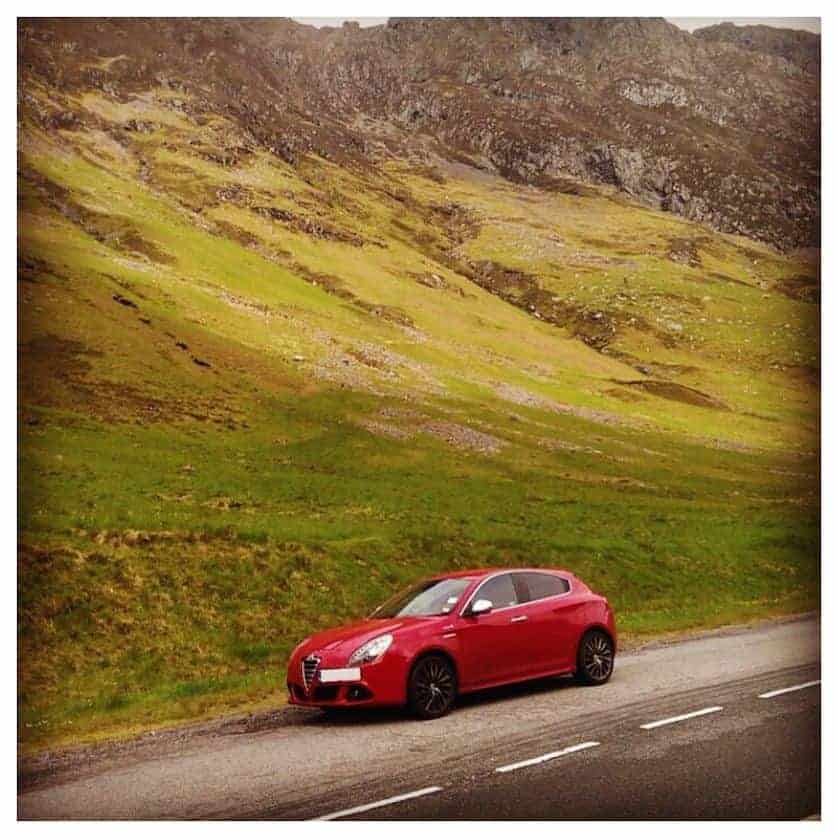 We crammed a lot into three short days, but had a fantastic time. I will not leave it so long next time before returning to this beautiful part of the UK. 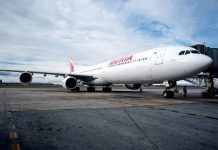 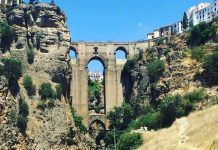 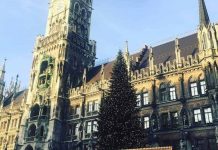